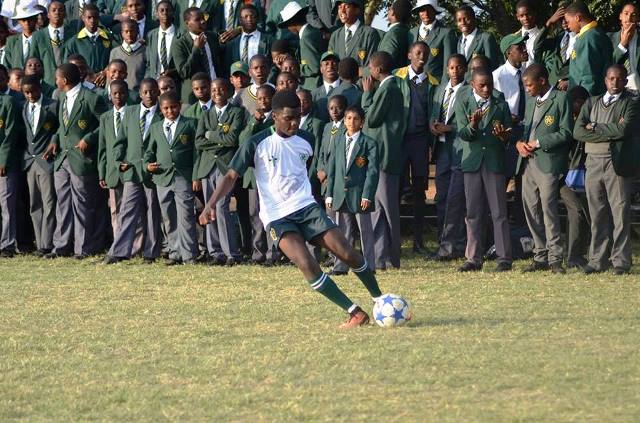 The first quarter of the match was intense with lots of action but neither of the well-prepared teams was able to snatch a goal from the other when, suddenly, five minutes before half time the incredible Shaun Matika scored a breath-taking shot at goal off a free kick which took the Eagles into the lead.

Ten minutes after half time a penalty was awarded to CBC. As number twenty took the penalty it was stopped by Gifford’s keeper but then was smashed into the back net of the goal by the players waiting for the rebound. The supporting CBC students exploded into roar of cheers. Towards the conclusion of the exciting match, the game intensified, as more and more fouls were conceded by both sides, and with them, more and more chances of scoring appeared. Then the Eagle’s keeper dived and saved a shot from the inevitable attack from Gifford.

There could only be one winner as the final whistle blew and CBC pulled off a two-nil win over Gifford.
In other soccer news, the CBC U15 team are the Imbizo District Champions after winning all their six matches during the CBZ District Qualifiers held at CBC on the 24th of May. Goals for CBC came from Farai Mbaiwa and Fundani Sinyolo who scored 5 and 4 goals respectively. CBC will now go on to represent Imbizo District at the Provincial Qualifiers to be held at Gifford High School on the 29th of June. Congratulations to the boys and their coaches.

CBC Eagles win Runners up Shield at the CHISZ Tournament.