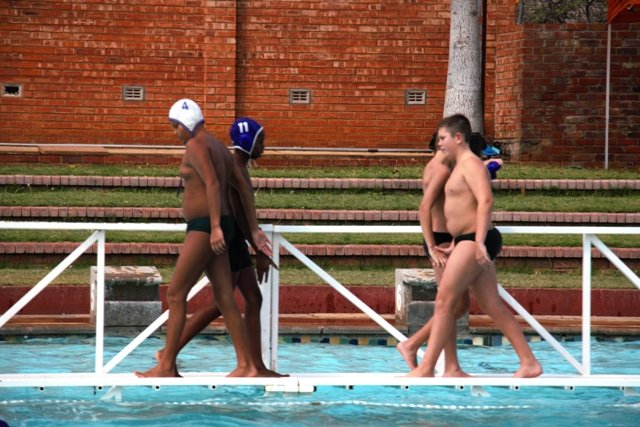 This was the major highlight and main attraction of the day. The minutes before the match were filled with sounds of the well trained boys from both teams practising their shooting. Then the game was on. Both teams were fighting hard with none managing to register the initial score, when all of a sudden the Guppies from Esigodini smashed in a goal. This was shortly followed by a goal by CBC to bring an end to the first quarter.
As the whistle blew to signal the start of the 2nd quarter, it was CBC who had the fastest burner and who took possession of the ball. But this was not enough to hold off the strong opposition as Falcon plopped in another goal. Then CBC brought the score to two all. Another goal was scored by the hosts to bring the second quarter to a nail biting finish.
The third quarter of the game opened with a goal from Falcon. The game seemed to be getting even more intense as CBC was awarded two exclusions.Then Falcon drifted into the lead with another brilliant goal. Not long after that CBC bounced in another goal to make the scores even. This signaled the end of the third quarter. As the final quarter started, it was again CBC who gained possession. Not long after the start of the quarter CBC scored yet another goal and then another.
This was shortly followed by another and then one more by Falcon and then the game was over.
Well done to the two teams for a thrilling performance in the pool.

6 State of the Art Tennis Courts Commissioned at CBC

Davidians are the 2021 Form 1 Camp Champions